Reviews of my Monkees biography,
"The Monkees – caught in a false image" 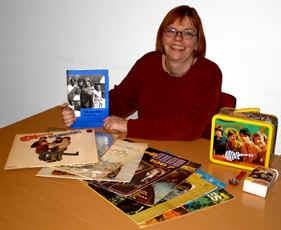 THE MONKEES - CAUGHT IN A FALSE IMAGE

The Monkees - Caught in a False Image, is a new book from the Danish writer Lise Lyng Falkenberg. 165 pages with photos by Henry Diltz, the book started out as an interview with Peter Tork and developed into a complete biography on the Monkees. The main focus is placed on the Monkees' visual works, especially the TV show, "HEAD" and "33 1/3 RPM" which are submitted to thorough analyses. Furthermore the book includes an annotated discography, accounts of the many concert tours as well as an annotated listing of each episode of the show and a bibliography for further reading.

Band 6 member Glenn Gretlund is also Danish, and not only that, he happens to come from the very town that Lise lives in. So of course Glenn was the natural choice when it came to asking someone to write a review of the book. Here's what he has to say:

"I have always considered myself to be the only 'real' Monkees fan from Denmark.

Maybe I am. I honestly cannot say that I have come across many Danes who think that the group is anything special. It was therefore a huge surprise to me when I learned about Lise Lyng Falkenberg's book, "The Monkees - Caught In A False Image". The fact that she comes from the same town as me was an even bigger shock. It was simply a book I had to read.

The book's main objective is to get rid of the false rumors that have haunted and still trouble the group, e.g. the Charles Manson audition and the rumors that they cannot play their own instruments. But there is a lot more to the book than that. Falkenberg has done a great job analyzing the group, its members, the TV series and the people and environment surrounding the Monkees. It is clear that an incredible amount of research and time has gone into the book. It contains quite a few details that fans may not have read about elsewhere. Did you know that Peter Tork used to live with Michael and Phyllis Nesmith? Or that Micky's mother invested most of his money in real estate? That Peter Tork used to turn his belt buckle sideways in order for it not to scratch his guitar? It is full of interesting facts.

There are only few things I can criticize: one is that the book does not have a content page or index, making it difficult to find your way around. The other is the analysis of all the group's songs. Music is very subjective and I, for instance, do not agree that 'I'll Love You Forever' is a huge embarrassment or that 'I Believe You' is the best track on 'JUSTUS'.

On the whole Falkenberg's book would be a nice addition to any Monkee fan's collection. Its analysis is more thorough than any other book available on the market. The fact that the author is Danish does not show, the book is very well written."

To give you a little background information on the author, and how the book came about, here's Lise in her own words:

"About the interview with Peter Tork: It took place already in the mid-nineties. I toyed with the idea about writing a book about the Monkees then, but because of my other work (I'm a Ph.D. at the University of Southern Denmark and a freelance journalist as well as a writer of fiction) and the birth of my daughter, I didn't get to do it until now. Part of the interview was used in the Danish film magazine "Levende Billeder" (Living Pictures) which brought it in 1996 to celebrate the Monkees' 30 anniversary, but the full interview has not been published until now. I was interested in making a book about the Monkees, not just Peter Tork. The reason why only Peter Tork is interviewed for the book is simple: the 3 other Monkees never responded to my request of giving an interview. Peter was very obliging, though, and within weeks from my request he answered yes. I was very positively surprised about his kindness and openness and I didn't think it a bad thing, that he is the only one interviewed for the book as a biography about him is still missing." Magnolia Sue.

Remember the Monkees? Of course you do! In the sixties Micky Dolenz, Davy Jones, Mike Nesmith and Peter Tork starred in the famous TV series about a pop group and eventually turned into a pop group themselves, thereby becoming the first manufactured boy band in the world. Now the Monkees celebrate their 35th anniversary and they are still going strong. This book started out as an interview with Peter Tork and developed into a complete biography on the Monkees. The main focus is placed on the Monkees' visual works, especially the TV show, the feature film HEAD and the TV special 33 1/3 Revolutions Per Monkee, which are all submitted to thorough analyses. Furthermore the book includes an annotated discography, accounts of the many concert tours as well as an annotated listing of each episode of the show and a bibliography for further reading.

The author Lise Lyng Falkenberg (1962) is an established Danish writer of mostly fiction and works of literary studies. Since her début in 1983 a dozen of her books have been published as well as hundreds of articles, essays and reviews on movies, plays, literature, art and music. She is a Ph.D. in literature and cultural studies and is currently living with her young daughter Tea in the city of Odense, Denmark, where she works both as a researcher at the University of Southern Denmark and as an international freelance journalist.

Fans are invited to a forum where fans will be able to ask Lise Lyng Falkenberg questions on her new book in January. Check out the www.shoesuedeblues.com site for details.

They say you can't judge a book by its cover, but when it comes to books on the Monkees I disagree. It only takes a few moments to size up a book by presentation, photos, random fact check & the amount of space wasted by blank pages.

From the moment I received my copy of "THE MONKEES - CAUGHT IN A FALSE IMAGE", I recognized a serious piece on The Monkees. I was impressed & the more I read, I knew my original vibes were correct.

The soft cover book is beautifully presented with 165 pages focusing on the Monkees, the TV show, 33 1/3, Head, concert tours (including 2001), discography and chapters on each of their solo careers. What makes this book different? Lise analyses everything from the Monkees four different on-screen characters and their defined relationships to each other, on and off the show, to the symbolism of 33 1/3.

I would highly recommend this book to fans and I would rate it in my top 5 Monkee books. I give it an 8 out of 10 (I would have liked a few more pics).